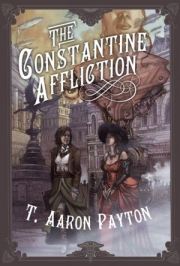 Surprise, I have a lot of steampunk books. Some of them I've even finished reading. The Constantine Affliction was a book that just kept dragging me back to the iPad to read what happened next. The main characters are an investigative journalist and a bored aristocrat detective, with many other near-main characters taking up other spots on the roster. The titular Constantine Affliction is an STD that either kills the recipient or swaps their gender. Given how gender biased roles and responsibilities were in the Victorian era, this causes quite the uproar and a fair amount of cultural strain – and it's explored nicely by the characters and in exposition.

The characters are fully formed, the world is an interesting construct, the science is a great mix of bonkers and plausible, and it has peaks throughout the book rather than building up to a big ending and that's it. That last point is an important one; only 40% of the way into the book I had a "Wow, that's a resolution" moment and was then quite happy to see I had a lot more to read.

It does take a rather abrupt turn part way through (that is admittedly firmly hinted at through the book but the shift from hint to clue-to-the-face was jarring) and it is a very well worn trope for the steampunk genre, but its great fun throughout that so easy to let the interrupting just drift past.