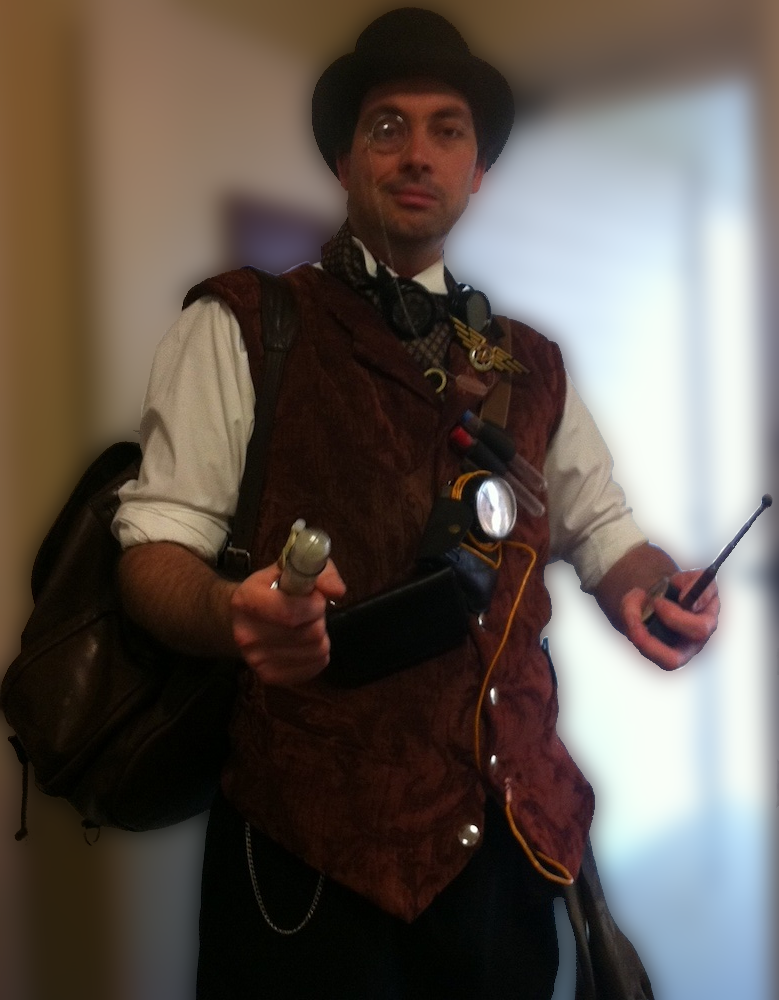 On Saturday 6th, Brisbane hosted the inaugural Steampunk Strides event. Billed as "a night of well-mannered frivolity, where the Steam World and Modern day society meet!", the event entertained near-capacity attendees with music, burlesque and belly-dancing, fashion, stalls, a make-yourself-steampunk display and a photo booth. The concept of Ged Maybury (author of Across the Stonewind Sky), he formed a local band of enthusiastic smart-people with the dual goal of providing a place for local Steampunkers to showcase their talent and to show interested people just what Steampunk was about.

And it was great.

It was held at the Kingston Butter Factory, right near a train-station making it easy for people to get to. Booth-holders were a collection of local, well known alternative fashion groups and highly talented individual artists of stitch and seam (including a make-up booth; an ethical taxidermist along with wonderful jewellers [some of whom alter origami into washing-machine-defying broaches and earrings]). The ROSEA-pioneered "MakeYourselfASteampunkOutfit" booth saw a more elaborate version at this event, and was joined with a photo booth that did colour, black and white or sepia pictures and was lots of fun (thanks for your original idea, Lady Alex!). The musical accompaniment to the fashion shows was provided by Gimpus, a heavy rock band who toned their show down to be a real accompaniment to the fashion display and the fashions themselves were brilliant.

One of my biggest surprises was the number of steampunkers who I had never met before, and the number of steampunkers I do know that didn't make it to the event. I take this as a positive sign that, despite the cries of Beiber (which I have to say is a bit harsh) and the woes of mainstream, the movement is continuing to (ahem) stride ahead. The quality of the entrants in the Fashion/ Build award was testament to that, the well-earned winners being a family Steampunk Ghostbusters team with elaborate and device-functional backpacks (and the cutest darn little steampunker you ever did see that wasn't my own son).

As an attendee, I have to rate the Steampunk Strides an unqualified success and dearly hope they are planning on making this a recurring event.

To see more from the event (I took no photos as per the request to only allow the official photographers their space):