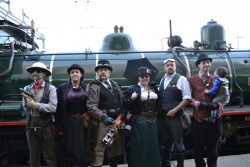 The Crew, side of train (shot by Jaymes Young)

This year when planning the STEAM picnic, a clever chap noted that there was a Steam train that left the station near our traditional Roma Street Parklands picnic spot on Sundays. The idea was thrown around and a group of us decided to steam train before picnicking that afternoon.

The picnic turn-out was a lot lower than usual (a lot lower) but it turned it into a much closer chat, being able to have a less divide-into-subgroups afternoon snack was delightful. To make it the most splendid picnic ever, Tesric very cleverly proposed to Merryn as the group was breaking up and it was absolutely beautiful. An honour to have been present as two absolutely wonderful people teared up and hugged each other.

My son Sean joined us for his second steam-picnic and Jocelyn dressed up as well - meaning we got some lovely Steam family shots as well as the group. I chose to wear my candy-stripe shirt rather than my traditional white; partly for fun, partly to play with modernising steampunk, and partly because it's something the Professor would do if he could.