ROSEA is an acronym for the Royal Omnitological Society for Electrodyne Adventurers. It was founded in the late 1800s to combine the talents of various skilled individuals from across the globe into one organisation, ostensibly to centrally resource exploration and discovery. Digging deeper, some people have formed suspicions that Her Majesty wanted to be able to lay claim to more knowledge and land than she could gather by her own resources. Still, ROSEA is dedicated the the pursuit of knowledge, adventure, and to find out what’s behind that thing over there.

ROSEA has joined with another local Brisbane group FAUST into a combined Steampunk over-mind called “STEAM”. You can join STEAM at their Facebook page.

Below are the profiles of the six founding members of ROSEA. 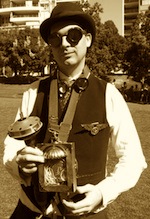 As the world’s leading expert in Omniology (the study of everything), Professor von Explaino is the theoretical catch-all of scientific endeavour. No field is to obscure not to have met the Professor’s interest at some point, and the only time he’s happier than when he’s found something to investigate is when he is educating other people vis-à-vis those discoveries. Professor von Explaino’s latest breakthroughs in the fields of synthetic Aetherium, regenerating bank balances and dimensional flinging have brought new worlds to be explored and, in Captain Adventure’s case, perforated (when required). Being one of ROSEA’s founding members is counted as one of his proudest acheivements, alongside the Think Tank for out-of-the-box idea generation, the 7D transport platform (Direction, Depth, Distance, Date, Duration, Dimension, Deviation) and Her Majesty’s special commendation for “beneficial contributions to humanity while staying a safe distance away thank you very much”.

The Professor lives in the (according to him) soon to be ancestral castle that meanders throughout Europe. When not called to duty by ROSEA he spends his time split between innumerable scientific experiments inside (occassionaly outside and unfortunately sometimes through) his home, lecturing at various universities on his studies into Omniology, and traveling with his fiancee the Princess of Amber. The pair met during a crash-landing in the Asian continent and their partnership was forged by her rescuing him while he was trying to rescue her from the Asiatic Elemental courts. With Jade being the current ruling earth element the Princess opted to quietly abdicate and persue adventure. She is now his most enthusiastic test pilot.

The von Explainos are a carefully not famous family of progressive historical previsionists, as evidenced by their use of well proven techniques such as craniometry, physiognomy and phrenology to determine exactly the right path for all of their progeny. This explains Professor’s first name and chosen profession, along with his siblings Evil, Bookie, Judge and Saint. 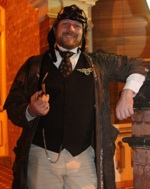 Captain Horatio Adventure was born into a family with a great history on the high seas. Horatio attended Oxford University with a major in Aethernautical Engineering, but was swayed by his love of exploration. At the age of twenty, Adventure, along with some fellow students built the Capricious, his first airship, which won the coveted Abbotsford Trophy for speed and reliability. Upon graduation, Adventure was recruited to the Royal Air Navy, where he served aboard the HMS Farragut. Lieutenant Adventure distinguished himself during a dangerous resupplying run to the besieged garrison of Lucknow, taking command when his captain and half the bridge crew were wiped out by a direct hit by a Chinese dragon-rocket. His further raid deep into Chinese territory with the damaged HMS Farragut and the subsequent capture of the warlord cemented his career, as well as the personal thanks of a grateful Queen Victoria. Horatio Adventure now commands his own airship, the Centurion Eagle, a Von Borg design modified to his personal specifications by the Royal Airship Yards.

Upon the founding of ROSEA, the Queen decided that due to the high amount of foreign membership, a military presence be established should any member decide to renegotiate with his or her government. Adventure took the role with zeal, allowing him to use the full resources of the Royal Air Navy, whilst at the same time gaining an independence rarely granted to captains of ships-of-the-line. He sees ROSEA as a way to add to his zeal for life, to discover new lands and new continents, and to wave the Union Flag whenever it is appropriate (or, indeed, possible). 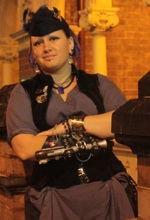 A journeywoman and odd-jobs, all-round handy person to have about. Will fight for the right reasons and causes, has had experience in the military, has travelled near and far over the years, and quite often travelled to alternate times and places. Most of her searchable history makes little to no sense. No-one is sure of her original origin or age, as the records tend to get muddled after repeat inter-stream travel. Currently she is working with ROSEA, as she likes the way they operate and the beneficial outcomes of many of their missions. She has also previously travelled to many of the places under current investigation and has the skills to if not guide, then at least point out some of the sneakier dangers of the realm.

A woman of strict moral code and ethics, who does whats needed to produce the best outcome at the time and situation. 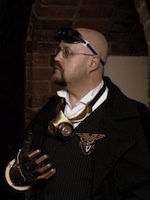 As taken from the Baron’s entry in Who’s Who 189? Edition.

Baron Cyrus Von Borg is the 21st hereditary Baron of Gralstadt, he is the CEO of Von Borg industries, that supplies the Austrian Government with Materiel and Equipment for both military and civilian purposes. He holds a Doctorate in Esoteric Engineering. He lost the lower part of his right arm in a battle with Martian forces in 1871 at the battle of Markus Vale, he has a number of mechanical replacements, most notably his “Heat Cinq” which bears five of the Martian Rifles that he managed to adapt to his own power sources, and his favourite the “Mechanical Manductor” with which he has regained the use of a functioning hand, it is however slightly unpredictable as it has the brain of a squid controlling the fingers, the squid brain was a replacement for the original which was a pig brain, that turned out to be evil. The Baron joined the Royal Omnitological Society for Electrodyne Adventurers to get some adventure and excitement into his life that he misses from his Military Career. 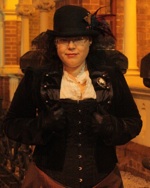 Lady Alex is an semi-professional dilettante, a notorious scandalmonger and a scandalous notary.

Within the Society, she acts as note-taker, photographer, roving girl reporter and historically-biased raconteur. As ROSEA liaison, she maintains friendly relationships with a number of inappropriate gentlepeople, ostensibly on behalf of the diplomatic needs of the Society.

After a brief but enlightening liaison with the tattooed lady of the Bostonian Orchidaceous Appreciation Society, Lady Alex was encouraged to leave civilised society somewhat precipitously for a Grand Tour of Anywhere Else. As her only means of support at that time was a robust IronClad corset, she soon found herself underfunded for a lifestyle to which she wished to become more accustomed. After delicately eluding an ungentle gathering of creditors in London, she found herself in the offices of the Royal Omnitological Society for Electrodyne Adventurers. A tender for membership was accepted post-haste, and she departed on the next airship. Her recompense monetarily is still considered insufficient, but she has found other forms of compensation… via recordings of her adventures with the crew!

Lady Alex’s recollections of various events sometimes mismatch those of her fellow crew members, and she has faced accusations of personal bias in the past. However, as she often says, “History is re-written by the Victorians!”.

Her scribblings (often inscribed on whatever item happens to be nearby) are sent to a wide variety of newspapers and magazines to be filed in a meticulous and awkward fashion, and then ignored. None of these publications recall employing Lady Alex, nor will they admit to any knowledge of her activities.

Lady Alex has a noted fetish for fountain pens and antique typewriters, papercraft and leatherwork, vintage cameras and corsetry. 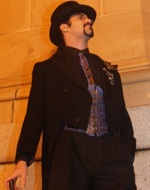 His upbringing and background are a mystery, other than that he had a sheltered life and was extensively tutored. His file was once colorfully described as “containing larger holes than a syphilitic brain”.

An interesting case, he originally appeared at the ROSEA office with a note from his mother requesting that he be accepted, a list of allergies and activities that he should be exempted from, and rather generous banknote ‘to cover any expenses that the organization might incur during his membership’. Initially denied membership for being rather young and without any apparent skills, this decision was hastily reversed some hours later after a post adventure celebration that resulted in a rather large tavern bill and the need for reconstruction of several London buildings.

Initially accepted as a probationary member, under the guise of ‘work experience’, he was able to demonstrate aptitude in a number of areas including use of pistols and close quarters combat. The crew have learnt that he is problematic around precision instruments, explosives and frankly anything easily broken. Since Von Borg has started using Christoph as a stress-tester, Von Borg Industries products are considered to be amongst the most reliable products available.

Christoph has been on many occasion invaluable member to the team. In social settings he has acted as a distraction, while other members complete the mission. A notable example of this was during a mission in Luxumberg where he simultaneously wooed a noble’s daughter, dueled the captain of guard and set his pants on fire (did we mention that he is rather accident prone?). He has also taken a keen interest in triage and basic medicine after learning of Cyrus and Professor’s views on surgical practice.

Small-arms and close-quarter weapons, first-aid, surviving his ‘accident’ without long-term harm, stealthy removal of the more scandalous references of himself from Lady Alex’s correspondences