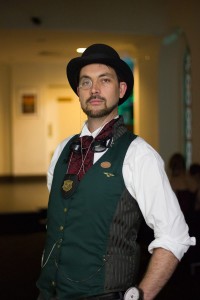 I'm Colin Morris, this site contains little web-widgets I've built over the years along with documenting some of my explorations of the steampunk genre.

For the code-savvy: I server-side code in PHP and web front end I've started avoiding frameworks by using the new CSS/JS capabilities native to browsers. I'm very keen on the Behat implementation of Gherkin for user-testing and am happy to chat about my efforts. I'm also participating as much as I can in the IndieWeb, an excellent initiative for owning your own content.

For the steampunk afficionado: I'm of the steampulp persuasion, a middling tinkerer, and a member of R.O.S.E.A, S.T.E.A.M and the Steampunk Ghostbusters.

I've written a tongue-in-cheek book "Code of the Coder 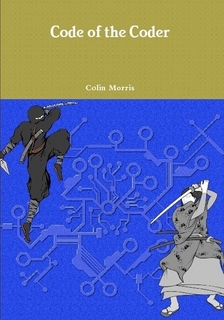 ", giving those who call themselves Code Ninja or CSS Samurai a list of disciplines and virtues from Togakure-ryū ninjutsu and Bushido samurai. I've also got a role in a podcast called "Copperheart 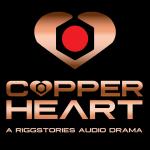 You can find me elsewhere on Twitter (@vonexplaino), Github (colinmo), and you can subscribe to my Blog feed.

People claim to be Code Ninja or CSS Samurai, but how many of them follow a code? How many of them practice daily katas to keep in the best condition? This book foolishly applies the Seven Virtues of Bushido and the Eighteen Disciplines of Togekure-ryū ninjutsu to the coding arts, mistakenly finding some wisdom along the way.

This book took a long time to write - as you can tell I'm more a coder than a good English… userer… but I really had a drive to put together my collected experience/ thoughts on coding and the misuse of cultural touchstones like Ninja and Samurai. I took about a year of Ninjutsu training when I was much younger and healthier, and I was lucky to have a great sensei and class. After training we'd talk about the culture and backstory. We had the code and the disciplines. Something I feel that coders really need to have. Even moreso now I look at web3 and NFTs and Muskworship.

I eat my own dogfood here - I've made a poster of the Bushido code and Togekure-ryū disciplines as applicable to coding, they're up at glance-level at home and at work. It has actually helped me - re-reading my section on Glory and Honour I started contributing to issues in other people's Git repositories, submitted bugs, worked harder to evangelise developers and testing at work, sharing my skills as much as I could. Heck, even talking more in Twitch.tv streams to help and interact with people came from Respect. Similarly in Disciplines I'm checking libraries more, patching more, taking note of my surroundings. So writing the book distilled my thoughts, reading it again helps reinforce action. If you'd like to buy the book, it's Print On Demand on Lulu. If you'd like to read it first, why not grab a PDF version of the book and let me know your thoughts? Or even start with the Code of the Coder Poster.

COPPERHEART follows the story of one of America's "Reconstruction Bunkers," an enormous underground facility housing thousands of people all working together toward the day they can return to the surface following a global nuclear mishap.

I've been following Michael J Rigg's stories for a while, his books Clockwork Looking Glass and Clockwork Pandora are great reads, and the Steam Rollers Adventure Podcast is a great podcast. A call to action from Michael got me to submit some voices for background acting in the SRAPCast. Once he asked for auditions to a new audiodrama I was all in. I didn't get the part I auditioned for... but I got the role of the titular Copperheart itself! Astounding!

The first season is done, casting is happening for an inbetween season, and season two is being written. Can't wait to dive back in to more voice acting and this universe.